You are here: Home / Blog / Thanks for helping my Mother-in-Law 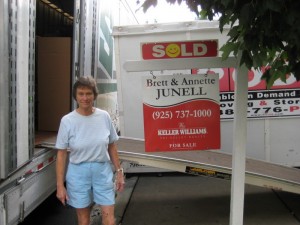 Pauline is, believe it or not, giddy.  Leif has never seen her so excited. She LOVES her new home and the neighborhood, and she and Bob are amazing in their progress of getting settled. She’s had several neighbors introduce themselves and she is loving getting to know the area. Joshua is thrilled they’re only 10 minutes away now, and we’ve been over several times, even though they’ve been here under a week. I think it was a great move for them, and they seem very happy about the change.

Pauline has had nothing but positive, glowing things to say about you and Brett. She was particularly grateful that her old house closed in time for her to get into her new house Friday. She was so impressed with the two of you, right from the initial interview. She saw your preparedness, professionalism and efficiency throughout the entire process and has talked about it more than once with us. I thank you for how you worked with her, but honestly I know that’s how you work with everyone. I’m glad she made the decision to work with the two of you. I knew she would be more than satisfied, but I thank you all the same.

– Laura Peterson, Oregon (referred her Mother-in-Law who wanted to move to Oregon to be closer to her family)