You are here: Home / Blog / Excellent job of counseling us in a difficult situation 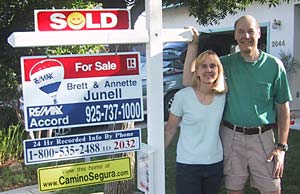 We originally listed at $968,000 but that was based on market conditions when we signed the listing and we weren’t ready for the house to go on MLS until several months later.  We could see the offering prices of similar houses dropping and we were getting very few tours so we re-listed the property at $923,000.  That brought about a tour per day and an offer of $890,000 which was not supported by the comps that the buyers presented which were for smaller properties in neighborhoods that were twice as old.  With our agents very effective help we eventually agreed on a price of $907,500 which seemed better than fair in a declining market.  Other homes in our neighborhood were more attractive to the majority of the buyers out there.  Some of those other homes started out at an asking price considerably higher than our initial asking price.  In the end they had reduced their asking price several times to less than what we agreed to sell our home for and they still don’t have a buyer after months on the market.

I think Brett and Annette did an excellent job of counseling us in a difficult situation.  They have quite a few innovative marketing ideas and since Brett was transferred to the US by his former employer as a computer tech he is really good at evaluating and presenting computer data on the latest market trends.  They both have taken courses in negotiating and it is evident that they employ those skills very well in the way they respond to clients and other brokers.

Jan found this couple when she was searching on line for comp information.  She made an inquiry about the market on line and got a call from Annette immediately with what she thought was excellent insight.  They have an online system set up for each client that tracks every event that takes place regarding your listing to show what is scheduled and what has already transpired including pertinent phone numbers and file copies of all documentation.  That makes it very easy for the client to know what is happening at any given time.  They also are very good at keeping in touch by e-mail and phone concerning every conversation they have with others concerning our listing.  Jan and I are very pleased.